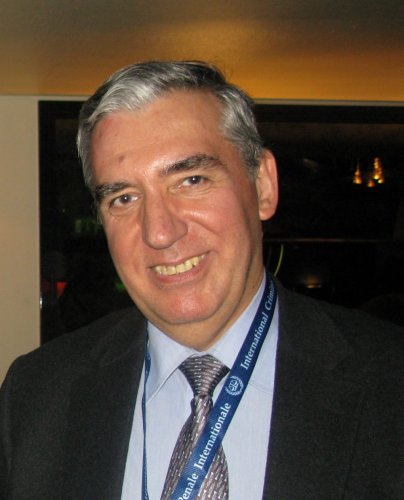 Birth date: 15 November, 1948 Death date: 4 October, 2013 Place of birth: Tbilisi, Georgia Place of death: Tbilisi, Georgia; buried at St. Nino Pantheon, Saburtalo, Tbilisi Category: scientist, philosopher, conflictologist, public figure. George Khutsishvili, Doctor of Philosophy, Professor, (15.XI.1948 – 4.X.2013), was prominent Georgian conflictologist, one of the founders of conflictology in Georgia and the Caucasian region, scientist in the filed of peace and conflict studies and public figure. In 1994 he founded independent non-for-profit and non-partisan organization 'International Center on Conflict and Negotiation' (ICCN), 1995-2013 was publisher of 'Peace Times', 'Conflicts and Negotiations', 'Alternative to Conflict', etc. During years he was invited and worked as a professor at different leading universities in Georgia and abroad. George Khutsishvili made significant input in studying of the essence of theoretical thinking and the problem of the infinite in the light of philosophy and mathematics (1970-80s). From 1990s to the end of his days G.K. dedicated his life to establishing and developing peace and conflict studies in Georgia.

As a Professor and prominent Georgian conflict researcher, George Khutsishvili was one of the founders of the study of conflict in Georgia and the Caucasian region. Originally contributing significantly to the problem of infinity in the field of mathematics and philosophy, from the 1990s onwards he dedicated his life to establishing the academic field of peace and conflict studies in Georgia. He was Philosophy Doctor from Ukraine Academy of Sciences (1991) and from Ivane Javakhishvili Tbilisi State University (1977), Founder and since 1994 Director of the International Center on Conflict and Negotiation (ICCN), Professor of Tbilisi State University (1995-2006), Full Professor of University of Georgia (from 2006), Professor of Tbilisi Institute of Foreign Languages (1979-1993), Visiting Research Fellow and Consultant in Ethnic Conflicts at Stanford University (1993-1995). Initiated and organised the first track-two post-war dialogue processes with Abkhaz (1995), Ossets (1996) and Russians (2008); played a key role in mobilizing the civil society against the religious and ethnic intolerance in Georgia in 2002 onwards. Since 2003 was the Caucasus Regional Coordinator of the Global Partnership for the Prevention of Armed Conflict (GPPAC). Professor Khutsishvili was one of the initiators and a founder of the Public Constitutional Commission (PCC) (2009). Has visited and explored many conflict and tension zones of the world; author and co-author of numerous books and articles. George Khutsishvili published over 200 articles and edited and co-authored numerous books. He remained involved in mediation in many different conflict zones throughout the world. Was an acknowledged political analyst and conflict mediator. Combined the qualification and experience of both scholar and practitioner in the field. In 2013, Professor George Khutsishvili sadly passed away at the age of 64. He is fondly remembered by his many colleagues in the fields of peacebuilding, mediation and conflict studies.