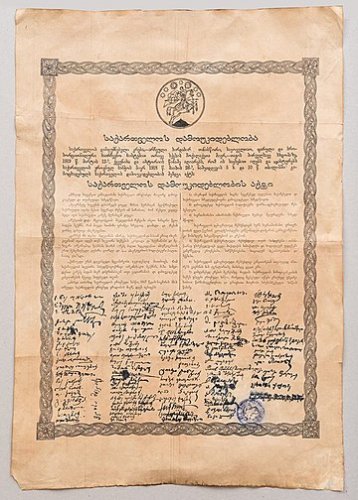 1929, September - A Telegram on Submission of Legislative Acts for the Creation of Autonomous Republics of Georgia. List of documents created by the People's Commissariat of Justice of Georgia.

1927 - The Constitution of the Georgian SSR

1927 - The Basic Law (Constitution) of the Abkhazian SSR

The Treaty of Kars (1921) later was recalled in the Georgia-Turkey Cooperation Agreement of 1992. See the Agreement on the website of the "Legislative Herald"

1921, 21 February - The Constitution of Georgia, adopted on 21 February 1921, by the Constituent Assembly of Georgia. At that time, the Georgian Armed Forces were fighting against the Russian army on the outskirts of Tbilisi. The constitution was published in March 1921 in the printing house of Nestor Khvingia in Batumi. (We would like to express our gratitude to the well known archivist for the copy of this document provided on March 25, 2021).

1920, 27 December - Provisional Act of Abkhazian Autonomy by the National Constitutional Council of Abkhazia.

1920, 27 December - Statement on Abkhazia Autonomy Issue by the Constitutional Delegation of the People's Council of Abkhazia.

1920, 7 May - The Treaty of Moscow signed between Soviet Russia (RSFSR) and the Democratic Republic of Georgia (DRG).

1919, 21 March - Letter to the People's Council of Abkhazia, the Constituent Assembly of Georgia.

2007 - A Letter to the State National Archive of Georgia, by the Government of the Autonomous Republic of Abkhazia. (The documents were kindly provided by Mr. Vakhtang Kolbaia, June, 2019).

1919, 21 July - Meeting of the People's Council of Abkhazia, Report and Correspondence on Relations between Georgia and the Autonomous Republic of Abkhazia.

1919, 10 May - Discussion of the Draft Constitution of the Autonomy of Abkhazia. Sukhumi District Committee of the Social-Democratic Party (Mensheviks): Resolutions and Letters.

1919, 12 March - First Constituent Assembly of Georgia Meeting: Congratulations on the Autonomy of Abkhazia.

1918, 26 May - Declaration of Independence of Georgia, Protocol of the First Meeting of Georgian National Council. Documents and Materials of Foreign Policy of Transcaucasus and Georgia. Typography of the Government of the Republic of Georgia, Tifflis, 1919. (From private archives of Ms. Nina Tsikhistavi-Khutsishvili, July, 2019).

1918, March 3 - The Peace Treaty of Brest-Litovsk. As a result of the Treaty, Russia ceded large territories of the Caucasus, Ardahan (Artaan) and Kars districts being among them (Article 4 of the Treaty). Under the Brest Agreement, very important territorial-border decisions were made without the representatives of the Transcaucasia. (Документы внешней политики СССР. Москва, 1959 г.).

Citation of this page

Suggested APA citation of this page: